Lead me to the rock that is higher than I,
for you have been my refuge,
a strong tower against the enemy.
Psalm 61:2‭-‬3‬

Today, we keep rejoicing over the deliverance of our POWs from Russian captivity, but we keep thinking and praying about the thousands that remain in captivity. We also keep praying for the healing and recovery (both physical and emotional) of the prisoners who returned home.

There are plenty of videos of the bizarre Russian “mobilization” (“burialization” as many Ukrainians call it, for Putin sends his fellow citizens to their sure death). The saddest part is that people of non-Russian nationalities (indigenous nations of the Russian Federation) are the first to be drafted. There are reports that in some remote settlements, no men are left. Putin managed to create a double genocide – against Ukrainians and against the non-Russian population of his country. May God deal with him according to His justice.

The Russian army keeps targeting Ukrainian civil infrastructure – over 10 missiles hit Zaporizhzhia tonight, not counting the attacks on other cities earlier in the day.

There seems to be general chaos in Russia as thousands have crowded the borders especially to the countries of Georgia and Finland and other border lands where they are reporting lines of cars stretching for miles. 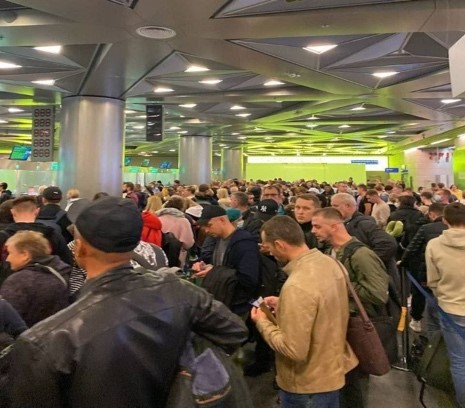 This is a picture of Moscow Airport where you see thousands of young men trying to leave the country.

Please do pray for Russia and for the people who desire peace , it’s usually not the people who are behind these authoritarian regimes. Pray too for Iran, where a similar situation is going on. In both of these places thousands of people are on the streets being beaten and arrested. Pray that God will have mercy on these countries, that justice and peace will prevail.

Pray too for the elections going on in the occupied areas, pray that the officials will be overcome with guilt and that truth will prevail.

These are extremely important days to be praying for Ukraine and the world.