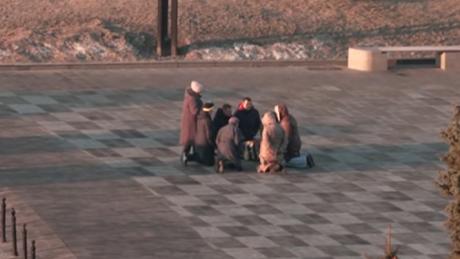 What is happening? The whole world is watching and wondering what is happening in Ukraine. After five days of battle, it seems that something unusual is taking place. News commentators are saying “It’s not going as expected.”

According to one Y leader from our Western Ukraine center, reports are coming in from all across the country reporting miracle after miracle. One pastor reported that missiles are sticking up in the ground – unexploded! Russian military vehicles are running out of fuel! Russian soldiers are confused and asking directions from local Ukrainians!

Maybe the bigger miracle is what is happening in Russia itself. There is huge antiwar movement that is spreading across the nation! Would you pray for our Y family in Russia? They want the worldwide Y family to know that they are not in favor of Russia’s invasion of Ukraine, and they do not want to be looked on as enemies. Thousands of anti-war protesters have been arrested in 26 different cities across Russia and the movement is growing. This includes many famous sports people, actors and actresses and even politicians. This could have an incredible impact in turning the tide. Please pray!

The same is true of our Belarus Y family. Their country has just come out of months of protest and was then propelled straight into this conflict. You need to know that Y Belarus is one of the most innovative, creative groups we have in our Y family. They are hurting in the midst of this and they need our prayers.

Our Y Kyiv leaders report that the situation was very difficult in the city last night but they came out of it this morning victorious and safe.

The Y Ternopil leaders report that their premises are crammed full of refugees and it’s a challenge to feed and house them all – but they are experiencing an amazing sense of unity, with volunteers coming to help. Ternopil is expecting 6,000 more refugees on March 1st. And Y Ternopil is packing a truck with food to deliver to the Y Kyiv center.

The lines of refugees at the borders are kilometers long, taking people two or three days to get cross. The throngs are made up of mostly women with their children, since men 18-60 are not allowed to leave the Ukraine. The situation is difficult with no food or no sanitation conditions set up. Once they get across to the other side of the borders, it is also challenging, with over a half million people that have already crossed and the possibility of three or four million more expected to cross in the next days.

Our Y centers in Poland, Romania, Czech Republic, Slovakia and Hungary are mobilizing their staff and students to meet people at the borders. They have set up their centers to host the families that are coming. They are welcoming the refugees joyfully, with open arms.

When asked what the spirit is like at the center in Ternopil, one of the leaders said “It’s Invigorating…full of life…victorious!”

The news media is in total surprise at the events of these past few days. The steadfastness of the Ukrainians to defend their country in this time of incredible testing is beyond belief.

We are seeing the same steadfastness and support from our Y family…in Ukraine, across Europe and around the world.

Years ago when Y was just beginning in Europe and we were establishing our first operating locations, Loren shared a vision of our centers being established one day’s travel distance from each other. That way we could go to the nearest Y center when a need or crisis arose. That is exactly what is happening right now!

Poland, where most refugees are fleeing has opened its doors and Y is there to take in our Ukrainian family. The same is happening in Romania, Hungary, Slovakia, Czech Republic, Moldova and even in countries further away like Germany and others. The response of our brothers and sisters to move over, make room, prepare food and receive their Ukrainian Y family members is amazing.

Worldwide Y response to this crisis has been unbelievable and perhaps a wonderful healing in our world after the divisive times brought about by Covid.

Our base in Ternopil is now the processing center for the thousands of refugees coming from Eastern Ukraine to Western Ukraine. They were quick to bring in the pastors of the churches in the city and were able to build a very effective network that went into action very quickly. They report that people have responded wholeheartedly throughout the area. A grocer called and asked if they needed groceries for the refugees. He brought a truckload. A bakery called and asked if they could use any cakes. Of course they could, and so 20 cakes were delivered to the Y center.

* Offerings are being taken by our Y family all over the world and we are able to keep the flow going.

Lots of miracles are being reported:

Keep praying! We will hear many stories as this continues to unfold.

* Donations can be made via www.ywamslavicministries.org/donate 100% of the funds will go to the needs in Ukraine and Ukrainian refugees at Y locations in surrounding nations.

“For we are not fighting against flesh-and-blood enemies, but against evil rulers and authorities of the unseen world, against mighty powers in this dark world, and against evil spirits in the heavenly places.” (NLT)

Since the earliest of days, the Slavic peoples have suffered. This is not the first conquest of Ukraine, it is one of many in the long history of this part of the world. The Mongol empire of the 13th century included most of the borders of the Soviet Empire but went all the way to India and included China. These are the same powers in the dark world trying to take control over what they have always felt was theirs.

As I watch the news and see refugees pouring across the borders into Poland and Romania and Moldova, I can’t but think of my own family escaping the horrendous starvation that Stalin imposed on Ukraine in the 1930s.

Ukraine has always been a thorn in the empire’s side. It is the spiritual center of this part of the world. Accepting Christianity in 988 AD it became a beacon of light. In the 1920s and 30s revival came to Ukraine and thousands became believers and were filled with the Holy Spirit. Among them my grandparents, who became some of the first missionaries in modern times, reaching out to the Cossacks. Thousands of others from this revival were spread across the Soviet Union as Stalin sent them off to Siberia and the far corners of the empire.

My generation followed, their example and we went out under Youth with a Mission. Many of us Slavic YWAMers are children of refugees who fled the grasp of the empire. My own family, many of whom served in YWAM including brothers, sister and our own children, Peter and Luba Iliyn and Kelly Hoodikoff, George Davidiuk, just to name a few.

YWAM began its work in Ukraine while it was still under Soviet domination. Underground Discipleship schools that were held in Estonia in the mid 80’s, were recorded by Ukrainian students and smuggled across Ukraine.

With the fall of the wall and the open doors that came with that, YWAM Ukraine thrived. Thousands came from all over the world to preach the gospel openly. Kelly and Vicky Hoodikoff came from YWAM New York and planted a base in Kyiv. That base became an important training base that eventually housed the University of the Nations campus that serves all of Eastern Europe.

Other bases were established in all the corners of Ukraine including Crimea. Ternopil became another center for the Western part of Ukraine. This was established by a team from Salem, Oregon led by another Ukrainian refugee from Canada, Deborah Skalinder and her husband.

Darlene Cunningham came to help us lead a Leadership Training School that brought 120 young leaders to Kyiv from where dozens of new bases and initiatives spread out to all of Eastern Europe.

In saying all of this, Russia too experienced this spring time of freedom and the spread of the gospel. For the first time in centuries places that had been robbed of their language, music and culture were found and restored. Some of our larger Ywam bases are in these places.

Today, there is a new generation of YWAMers across Eastern and Central Europe and Russia who have not lived under the rule of Communism and are not afraid to step out to do new things in new ways to reach their lands. They are not afraid of speaking out during this time and many are risking their freedom to stand with their Ukrainian brothers and sisters. Let’s pray for them as well.

Would you join us in prayer for Ukraine?
Most of our workers have been evacuated form Kyiv. Some have chosen to stay to care for the campus and are taking in refugees that are losing their homes.

Our base in Ternopil is now the main refugee processing center for the city as well as housing many of the YWAMers coming from Kyiv and the east. They need help with food, bedding, and other supplies for themselves and the many thousands they are serving.

Pray for our YWAMers that have left the country, many to Poland, Romania, the YWAMers in those countries are taking them in. Men from 18 to 60 are not allowed to leave the country so many of these leaving are mothers with their children. They too will need much financial help.

Many miracles are being reported and let’s pray for many more and be aware of where our battle lies, not with flesh and blood. As YWAMers let us pray as the Holy Spirit leads us and go deeper than just what the news shows us.

We will continue to update you as much as we can from our people in Ukraine and those who are now in safe havens who are getting reports from family and friends.

They need financial help and you can go to the following website to give. These will be distributed by our Ukrainian YWAMers and 100% will go to the needs in Ukraine and those who are refugees outside.

For the Kingdom,
Al Akimoff and the Slavic Ministries Team