Some thoughts from Ira from Kyiv
It is the Lord who goes before you. He will be with you; he will not leave you or forsake you. Do not fear or be dismayed. (Deuteronomy 31:8)
This verse came to mind as I was praying tonight. We went outside today to check on our vegetable garden when we heard a loud noise in the sky. A Russian missile rocket was flying over our house. It was low enough to see it very well. At that moment, I felt a whole range of emotions – fear, anger, helplessness. I started yelling at it, “Disappear! Disappear!” The anguish of knowing it will bring destruction to some unsuspecting people and being powerless to do anything about it. The only thing I could do was pray, so I prayed for this missile to be shot down, for it not to bring any destruction and death, for the protection of our air defense forces, and for God’s punishment on those who came to kill. The missile was gone in a matter of seconds, but we were pretty shaken and would stop in our tracks from any noise.
When I went inside, I immediately went online to check if a missile attack did any damage. Praise God, there was a report about at least 4 missiles rockets shot down. There was also a report about another missile rocket that fell into the river, not causing any damage. A couple of days ago, another missile hit an empty toilet at a beach in Odesa. According to the reports, the success rate of Ukraine’s air-defense system went from 29% at the beginning of the war to 72%. I know that there are thousands of prayers and hundreds of lives saved behind each of these reports, and I praise God.

Russia is launching another information attack on a world scale. In the past week, there were statements made by different people in different countries with a similar idea that Ukraine should give up currently occupied territories to let Putin “keep the face” and let the world get back to normal. We know how Russian propaganda works and how well-meaning people can be fed false ideas to be brought to the conclusions that would be useful for Russia. These statements that just happen (coincidence?) to be so similar are as far from a good solution as possible. Russia occupied Crimea and parts of Donetsk and Luhansk regions in 2014 but didn’t stop there. It just waited a little bit and came back for more.

You know, many Russians believe that Alaska was given to the USA as a gift or that it was “rented out” to the US for some time. What if they decide to reclaim Alaska as their territory? After all, that’s the reason they used to explain the annexation of Crimea. Would you agree that Alaska should be just given to Russia to appease the madman? And what about the people living there? Should they be gifted to Russia along with the land? Would it qualify as human trafficking? I hope you see how absurd these ideas are once you look deeper. So I pray for God’s truth to prevail in the hearts and minds of all people, but especially those in the position to make critical decisions. I praise God for all the support we’ve been given and pray that we’ll have grateful hearts.

Today’s picture is from Melitopol (Zaporizhzhia region). The occupational government ordered to burn down books on Ukrainian history (and other dangerous Ukrainian literature). I remember reading “Fahrenheit 451” in high school and thinking it was too dystopian ever to come true. I guess we’re seeing it come to life along with Orwell’s “1984” 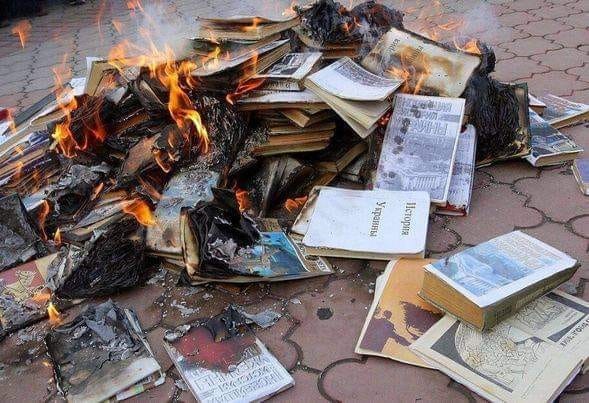 Some thoughts to help you as you continue to pray for Ukraine, pray against this powerful propaganda machine that continues to deceive so many around the world. Pray for truth to prevail.